Will DISH and DIRECTV Lose their Local Channels?

Last updated on January 20th, 2020 by George Levint
On this page- 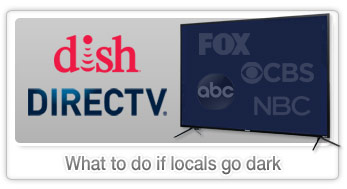 UPDATE (1/10/20): While an agreement still hasn’t been reached, an informal extension of the deadline between all parties and most studios took place. Local channels will remain live as negotiations continue on.

In the early days of satellite TV, local channels were noticeably absent in most areas of the country. Subscribers would either have to play around with the ol’ bunny ear antennas or just grin and bear it. A statute passed by congress in 2010 fixed all that. Called STELA (Satellite TV Extension and Localism Act), it forced local broadcasters to pass along their signal to both DISH and DIRECTV. And everything was good again, at least until now. STELA is due to expire later this week and the status of local coverage on satellite TV is back at risk.

Congress did recently pass a replacement bill, the Satellite TV Community Protection and Promotion Act of 2010, but unlike STELA it doesn’t force local broadcasters to pass their programming over to satellite companies. It goes into effect in a few days and we’ll see how things shake out but most experts agree the bill creates a very monopolistic environment in which the local broadcasters hold all the cards. Bottom line, unless it’s resolved there’s a chance local channels may get pulled from DISH and DIRECTV in the near future.

If locals do go dark, here’s how to keep access

There are a number of ways to manually add local channels to your TV/system — some require a one-time purchase, others are free or come along with a monthly charge. Here’s a quick summary…

Probably the best solution, high definition antennas like a Mohu let you capture over-the-air (free) transmissions of all/most of your local channels. The only caveat is you need a strong enough signal at your home and may need to play around with the location and orientation of the flat antenna. For example, positioning it on your roof and free from obstructions usually yields the best results. Done right, picture quality can be quite good at 1090p HD or higher.

Go here to punch in your address to get an idea of how strong the broadcast signals are in your area. And if you really only care about one or two local channels and those are sufficiently strong, you won’t need to worry about fine-tuning the rest. An HD antenna like a Mohu goes for about $40 and there’s no additional charge, ever. Simply connect it to the HDMI (or similar) slot in your TV. Find the input you used via your remote and you’re all set. For example, the Mohu Leaf 30 lets you search broadcasts from up to 40 miles away and is even compatible with 4k.

The main downside? There’s a couple extra remote button clicks involved in getting to your locals and, since its not run through the Hopper, you won’t be able to record any of the local programming. Not a biggie for most though.

The good ol’ circular antennas and the more advanced ones with taller and wider profiles usually do an OK job at finding local channels. It’s up to you to tweak their position and location to get the best picture… which will only be in standard definition but, hey, at least you have locals. Cost-wise, you’re looking at around $10-$50 for the antenna, and nothing thereafter.

If you’re not near a large city or local broadcasting tower, streaming your local channels may be your best bet. You’ll need to pay for the privilege so figure out if it’s worth it. The least-expensive service with locals is Sling TV (also owned by DISH). Their smallest plan is $25/mo and includes over 40 channels (with locals). Most of the time you can sign up under a 7-day trial, so give it a shot worry-free.

The likelihood that local channels get pulled from satellite TV is still fairly remote but it is a possibility. If it does happen, we don’t expect it to last for long but in the meantime, any of the options above can be used to fill that gap… and since none of them are long-term commitments, they’re a solid complement. Finally, as has been done in the past, DISH or DIRECTV may also offer complimentary access to the options above or similar ones. We’ll keep you updated as things move along…