Published on January 9th, 2016 by George Levint
On this page- 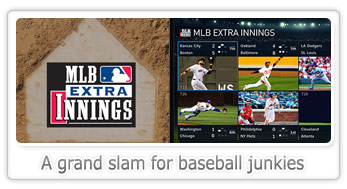 We profiled MLB Extra Innings back in 2013, but a lot has changed over the years and, really, all for the best if you’re a baseball junky. Going forward, we’ll be updating this article with the latest MLBEI features before each season. So, without further ado, here are all the features and add-ons you’ll get this year with an MLBEI subscription:

During the entire MLB season (early April to October), you’re able to watch up to 100 games per week. Each game is delivered via dual-feed, meaning you can choose whether to listen to the home or road teams’ broadcast. Via most platforms, you can also watch the game via different camera angles (birds-eye, outfield offset, dugout view, etc) – your options depend on the number of cameras set-up for that particular game. Keep in mind most of these secondary camera angles don’t deliver either team’s broadcast audio – you only get the background stadium noise, which is cool if you want that feel of being there in person or are fed up with the commentary :).

Regarding “out-of-market”, it simply refers to games outside your home team’s geographical location. For example, if you live in Seattle, Mariner games won’t be available via MLBEI. Instead, MLBEI assumes you can watch it on your local channel(s) or Fox affiliate, which is the case in >99% of MLB cities.

Previously exclusive and only available via a separate “Superfan” subscription, MLB Game Mix is now included in the MLBEI base package. It shows you up 8 live MLB games on ONE channel – simply choose which eight you want and swap at will. You can also control which of the eight delivers the audio. It’s a pretty handy feature if you’re more interested in fantasy points and tend to jump around from game-to-game. Game Mix is only available via HD, so keep than in mind if you’re on a non-compatible TV.

Probably the best major sports network on TV, MLB Network delivers live “look-ins”, awesome insight and plenty of insider info (for baseball and/or fantasy fans alike). If you’re looking to ramp up your baseball IQ, watch MLB Tonight a few days a week and you’ll reach guru status in no time. On DIRECTV, it’s available on channel 213, DISH channel 152. Recently, MLB Network has also increased the number of games they broadcast directly (with their in-house team of: Bob Costas, John Smoltz, Jim Kaat, Harold Reynolds, Bill Ripken, etc). Most weeks, you can catch up to 4 in-house games on MLB Network.

This is the catch-all name for the streaming side of MLB Extra Innings. To-date, there are over 400 devices that support MLB.tv. Some of the more popular include: Any connected desktop/laptop, iPhone, iPad, any Andriod phone, Playstation, Xbox, Roku, Apple TV, Chromecast, Amazon Fire, etc. Basically, there’s very little reason for any streaming unit or service to not include MLB.tv in their platform. So, as streaming devices evolve, expect MLBEI to continue to be available every step of the way.

How much is it?

As with most premium packages, you can subscribe by the month or all-at-once, at a discount. For 2016, we expect the following rates (still to be announced):
Early bird (before the season starts): $199/season
Regular: $219/season, ~$32/mo
Free trial: usually during first week of season

So, while certainly not cheap, if you’re a die-hard MLB fan and already follow a ton of live box scores or game logs on the internet, you might want to at least give the MLBEI free trial a look. If after a few days you can’t do without it, try it for another month and reassess. When I did the same a few years back, I got hooked and have been a subscriber 4 years running. If you change your mind, the nice part is it’s very easy to cancel before the next month or season.

Good luck to your home or fantasy team this year!