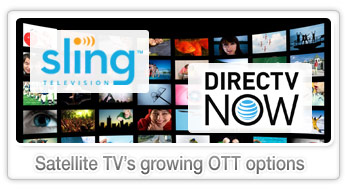 With the major splash Roku, Amazon Fire and Sling TV have made in recent years, over-the-top (OTT) TV has become a major strategy point, especially for more traditional TV providers like DISH and DIRECTV. In this article, we’ll recap their recent OTT launches, as well as products currently in the works…and help you figure out where it fits in with (and if it’s a good complement to) their current satellite TV service.

You’ve probably heard of Sling TV, but may not know it’s actually a subsidiary of DISH. Launched in February 2015, it’s aimed squarely at cord cutters and the younger “YouTube” generation. With 25-channel plans starting at $20/mo, in under a year, it’s attracted over half a million subscribers. Some of the more popular channels you can get include: ESPN, AMC, CNN, Comedy Central, History and Disney… so, about $1/mo per channel. They also offer upgrades to the base plan where you can get ~10 more channels for an extra $5-10/mo or so (FOX, NBC, regional channels, etc.).

Overall, the service is particularly attractive to folks that don’t watch a lot of TV or have VERY specific tastes. The downsides? Well, you won’t get all your local channels and if you’re used to the immediate access to 100s of channels with satellite TV, entertainment withdrawal tends to kick in :/.

Bottom line: students and/or occasional TV watchers should find some value here but if you dig your movies or a variety of programming options, you might find yourself getting a bit frustrated. By the way, unlike Netflix and other OTT providers, Sling puts a strict cap on concurrent users — ie, you’re only allowed one simultaneous session per account. Keep that in mind if your household tends to liberally share its TV streaming.

In late 2016, DIRECTV dipped its toes into the OTT waters via a three-tiered approach:
DIRECTV Now: their OTT flagship, it gives you access to most of their satellite TV base packages via their smartphone or TV-integrated DIRECTV Now app. The 4 plans available range in price from $35 to $70 per month:

The number of simultaneous connections allowed is 2, meaning you can have any combination of 2 phones, TVs, computers, etc, streaming the service at single time. The majority of folks don’t need more than 2, so that seems like a reasonable cap for streaming.

DIRECTV Mobile (coming soon): this service will essentially be DIRECTV Now with only mobile access (no at-home/wired option). In all likelihood, simultaneous connections will be 1 device at a time.
DIRECTV Preview (coming soon): as the name suggests, this will likely be a free ad-supported way to get a feel for the service, test the technology and watch some basic channels (likely, from AT&T/DIRECTV properties such as the Audience Network and video/anime programming from AT&T-backed Otter Media). Expect the simultaneous connections here to be 1 as well.

In all, a pretty nice set of OTT options and a definite rival to Sling TV.

Is OTT Right for You?

As with most things digital (especially on the entertainment side), it’s all about how much value you put on the time you spend watching your favorite shows… and free time in general. If you’re a student and/or go days at a time without watching any traditional TV, OTT might be right in your wheelhouse. It also might be a solid add-on to your satellite TV service if you don’t already have mobile access to your DVR or just want to catch a few channels while away from home.

If you already have satellite/cable TV and use it daily, you’ll probably find OTT, and internet TV in general, fairly restricting. At least, that’s the been the feedback we’ve received thus far. Finally, if your entertainment budget ever does get tight, OTT might also make a nice bridge between satellite TV programming proper (in fact, there’s a good chance DIRECTV’s OTT services will eventually be offered by their retention department…possibly giving you a way to avoid contract cancellation fees if you’re looking to pause your satellite TV). Either way, it’s always in your best interest to have options and OTT will eventually add a nice additional layer of flexibility for consumers and providers alike.