DIRECTV has worked hard to become the de facto name in sports programming. They grabbed those reigns in the late ’90s after signing an exclusive deal with the NFL and really haven’t looked back. Of course, fans always want more and, with a slew of cool features for sports junkies, DIRECTV hasn’t disappointed. In this article, we’ll take a closer look at some of our favorites, SportsMix, GameFinder and real-time Fantasy Stats… 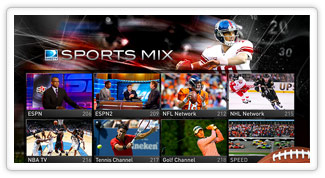 Probably my favorite of the lot, SportsMix is really a catch-all name for DIRECTV’s feature that lets you view multiple, simultaneous views of a league or event (up to 8 channels at once). Some of my favorites are the NFL, MLB and US Open mixes. You can also configure ANY 8 random sports channels, including ESPN SportsCenter and other news-related shows. Kinda handy when you want a recap of the day’s games while still watching the marquee match-up during PrimeTime. Bottom line, there’s really nothing better than streaming 8 different games during the NFL playoffs or March Mardness…especially if you’re a fantasy sports junkie (more on that below :).

Wishlist: Though probably difficult to pull off, it’d be great to have a downsized version of SportsMix available on mobile devices (iPad, iPhone, etc.). Watching 2-3 games at the same time while on the road (not literally :)) would be very cool. Of course, bandwidth and connection speeds are limiting factors, but provided you’re on high-speed WiFi, my guess is it’s plausible. 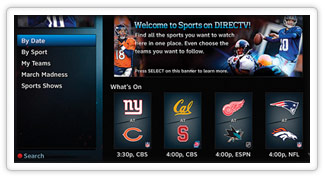 Only available with the Genie DVR, GameFinder is probably the easiest way to find all the current and upcoming sporting events available. Sortable by sport, date, team and show, it gives you a great snapshot of all your favorite games…and subtly introduces you to plenty of others. Another nice touch is the ability to save your favorite squads under the “My Teams” section – from there, you can manage your recordings and quickly swap from game to game. Overall, its interface closely resembles the rest of DIRECTV’s program guide — vibrant colors/logs contrasted against that charcoal background. 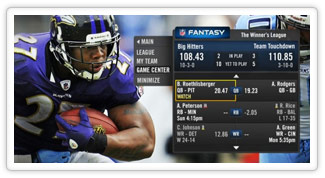 With all the major websites and networks heavily invested, fantasy ball has grown into a full-fledged, multi-billion dollar industry. From your local league to the million dollar contest in Vegas, a single dinger or touchdown can make ALL the difference. And if a player with a legit backup goes down, it’s a mad dash for the free agent wire…where every second counts. That’s where combining a couple of these features can really come in handy. For example, I like to have SportsMix running to keep an eye on my key games/players and as I click into full view, track all my stats via DIRECTV’s interface. There, you can add all your players and see how you stack up against the rest of your league…all in real-time.

Wishlist: To make roster updates easier, I’d love to see an option that lets you login to the major fantasy sites (ESPN, Yahoo, CBS, etc). Yeah, there may be a conflict of interest, but if you have multiple teams, it’d save hours over the course of a season.

Every year, DIRECTV ups the ante with improvements to these and other proprietary sports features. It’s good to see them being proactive and receptive to their subscribers’ requests. Obviously, the NFL is the linchpin to their sports programming (and these features), so everyone is closely watching who wins the new contract with the league. As of this writing, it appears DIRECTV is, again, the front-runner to win the nearly billion-dollar contract. Here’s hoping it happens — it couldn’t end up in better hands.