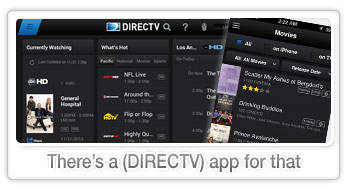 DIRECTV has been at the forefront of satellite technology for a while now. So when the entire industry began expanding into mobile (smartphones, laptops, tablets, etc), it’s no surprise they were right there to pave the way. DIRECTV offers quite a few ways you can stay connected while on the move, but it’s really all about their two main players…the Smartphone and Tablet apps.

In this article, we’ll discuss some of the more popular features of each…

The first, and still the most popular way to catch DIRECTV programming on the go, the iPhone, Android, Windows, etc. apps have intelligently evolved over the years. They initially started as a rudimentary view-only way to watch recorded shows. As network speeds and operating systems on the iPhone and Android improved, you were able to perform cool new functions such as managing your DVR and streaming live shows. Here are some our favorites:

Grab the apps for your phone here: iPhone, Android

For the most part, all the features above apply to their corresponding tablet as well (iPad, Kindle, Android). The main difference is, of course, quite a bit more real estate…on the tablet, you’re able to browse and edit things MUCH quicker. Watching movies or programs is really where it’s at though. Particularly on high resolution/retina tablet displays, the color and clarity doesn’t get much better.

Grab the apps for your tablet here: iPad, Android, Kindle

While DIRECTV’s apps have come a long way over the past few years, there’s still a ton of cool stuff in the pipeline. As folks spend more and more time on their devices, expect mobile access to eventually match that which you have at home (currently, you can access 50-75% of your at-home programming while on the road). Finally, if you’re stacking up DIRECTV’s apps vs DISH, there’s very little comparison. While DISH HAS made some pretty large strides over the years, they’re still a distant second (and roughly on par with cable-related apps).