In the interest of unrelenting convenience, DIRECTV recently added a few cool new features to their higher-end DVRs: Rewind, Restart and All Seasons. All three help you do the same thing in slightly different ways; that is, if you ever forget to record a show, they’re your DVR safety net. Let’s dig a bit further on how each feature works… 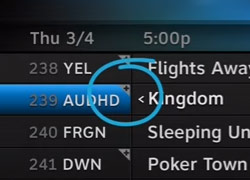 Connected to DIRECTV’s On Demand feature, 72-Hour Rewind lets you watch any show that aired over the previous 3 days. To use it, simply spot the (+) plus sign next to the channel name in the program guide. Select it and from the next screen, choose the “Missed it? Watch Now!” option. Every show that aired over the past 72 hours will fire on up. Just be sure your receiver is connected to the internet (the system needs to communicate with home base to keep the program list active/current).

Only fairly new DIRECTV receivers let you access the feature: HR24 for non-Genie receivers and HR34 and higher for Genie DVRs (Genie Minis join in on the fun too :). 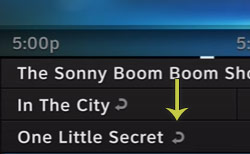 A nice complement to Rewind, the Restart feature conveniently and easily lets you do one thing: jump back to the start of a currently-playing program. To use it, simply check if a left-pointed curled arrow shows next to an episode listing. If so, the feature is available – hit the Rewind button on your remote and it’ll automatically start at the beginning, even if there’s only a minute left in the show. As with the 72-Hour Rewind feature, only a select pack of channels currently support the feature (72 channels as of this writing). For a fairly new feature, that’s quite a good number and expect its channel list to eclipse 100 by next year.

With respect to compatible DVRs, it’s the same list as above (HR24 non-Genie and HR34 & above) 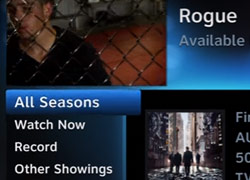 If you’re a binge-watcher, this one should be right up your alley. Akin to Netflix’s playback, All Seasons lets you sequentially watch ALL the episodes/seasons of your favorite shows. Since it’s not tied to a particular channel or individual program listing, to access the feature, first hit the “Menu” button on your remote. Then “Smart Search” for a particular series. At the very top of the navigation bar on the left, if available, “All Seasons” will show up. Of course, not every series is included, but in our tests, a surprisingly large percentage of them have the feature enabled. After you select the navigation button, simply browse by episode and season. Hit play and the continuous play option will get activated, meaning at the conclusion of the episode, the next automatically starts. So, get your popcorn ready, find a comfy seat and binge-watch away.

A nice perk of the feature is it includes all the episodes aired on different channels. So, for example, if different episodes of the same series aired exclusively on TNT and A&E, they’ll ALL show up in the “All Seasons” window. Nearly all the newer receivers (HR24 and up) have All Seasons enabled, with likely more added to that list as DIRECTV streamlines the feature’s functionality.