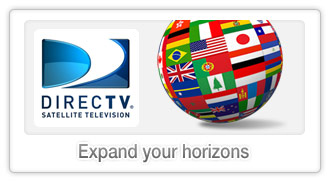 If English is your second language or you just enjoy watching international programming, DIRECTV has some of the most comprehensive plans in the industry. From South America to Asia, WorldDirect has plenty for just about any taste. But, how exactly do international plans work? Can you get JUST those channels or do you need a base package? (quick answer, you do need a base). For all the juicy details, read on…

Base Plans That’ll Qualify You For WorldDirect

As mentioned, DIRECTV doesn’t let you order international service until or unless you get a qualifying base package. As of now, those plans include:

Basic Choice™ – not typically advertised outside of international circles, this plan gives you just 85 non-international channels, including locals. It’s DIRECTV’s lowest-priced plan and a solid option if you don’t watch much TV or don’t prefer English-only programming.

Preferred Choice™ – similar to Basic Choice but you get a bit larger selection with 125 total channels.

Spanish plans – not surprisingly, just about any fully-featured Spanish package works, including: Mas Mexico™, Optimo Mas™, Mas Ultra™ and Lo Maximo™. You’ll get anywhere from 105 to 320 channels with about 15% of them 100% Spanish (note these aren’t WorldDirect channels, they’re typically just Spanish versions of popular channels such as the Discovery Channel Espanol, History Channel Espanol, etc).

Now that you have a qualifying base package, the next step is to add-on your international programming. DIRECTV offers a variety of plans for all the major langauges/regions. Those currently include:

Spanish – by far, DIRECTV’s most popular Latin American plan is EN ESPAÑOL™. For $14.99 per month, you’ll get about 40 100% Spanish, high-demand channels, such as Univision West, Telemundo West, mun2, CNNe, Cino and much more. Programming originates from all corners of the world, including Mexico, Argentina, Puerto Rico, Peru, Dominican Republic, etc. You’ll also get a TON of soccer games, broadcast direct from the home team’s feed.

Chinese – coined MandarinDirect™, you’ll get about 10 of China’s biggest TV networks. At $16.99/mo, it’s a pretty good bargain considering the relative scarcity of Chinese-specific programming available in the U.S.

Korean – if you’re looking to keep up with all the news and entertainment from Korea, KoreanDirect™ will satisfy most needs. For $26.99/mo, you’ll get about 11 general-interest channels such as SBS, EBS, TAN TV, YTN and more. Golf junkies can order KoreanDirect™ Golf ($31.99/mo) and get The Golf Channel added to their service as well.

The Rest – DIRECTV also offers international programming in Filipino, Greek, Vietnamese and a few other languages. They’re always adding new regions/channels, so be sure to check with them before committing to a plan.