Is DISH’s Internet Service Right for You?

Last updated on February 20th, 2013 by George Levint
On this page- 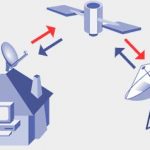 If you’re looking into broadband internet with DISH, it’s most likely because of need (i.e., DSL or cable isn’t available). The majority of its users live in remote locations where DSL hubs and cable lines don’t run (companies aren’t willing to invest in the infrastructure to service a relatively small number of customers). And when it comes to speed, satellite internet can’t compete with wired versions because the signal gets dampened as it travels from the satellite to your dish. All in all, if you’re in a position where DISH’s internet is one of your only options, don’t worry, it still provides plenty of upside. Here’s what to expect:

Depending on the plan, you’ll get download speeds anywhere from 1.0 Mbps to 2.0 Mbps. The reason for the 2.0 cap is the sequence of events that get triggered when you try to view a web page using satellite internet. Essentially, it’s a 3-step process.

1) Signal request – as you attempt to load up a web page, your dish will send out a request to the orbiting satellite.
2) Network relay – the satellite will then communicate to its network center (back on the ground) which finds the page and preps it.
3) Page load – your dish will then receive the packet from the satellite and send it to your modem. The modem decrypts the signal, sends it to your computer and you’re golden.

Due to all the steps, you won’t get the 8-35 Mbps of cable or even the 3-10 Mbps that come with DSL, but if you’re already a DISH subscriber and have been stuck with dial-up or slow WIFI, you’ll notice an immediately speed improvement.

Current DISH Network subscribers simply need add the service to their account — at a bundled discount — and your installer will set up the internet dish (different than your programming one) and link the signal to your computer via a special modem. The entire process takes about 45 min and once completed, there’s nothing more you need to do on your end. These days, the technology and equipment are extremely reliable so you should be up and running for years without issue.

Since satellite internet is a bit of a specialty service, it’s generally more expensive than cable and DSL. Prices tend to range from $39.99/mo (1.0 Mbps) to $109.99 (2.0 Mbps). Those are regular rates — current DISH subscribers or completely new customers always qualify for specials that last at least 3 months (sometimes a full year).

During your search, you’ve probably run across HughesNet more than a few times. They’re the leading DISH internet provider in the U.S and have been since the technology went public over a decade ago. Just as with regular DISH Network programming, you’ll deal with a retailer that’ll take your order, schedule your install and make sure you’re saving as much money as possible.

Due to the lower speeds and higher cost, satellite internet isn’t for everyone. It’s more of a safety net service if no other broadband is available. When I lived in a remote part of northern Oregon, I had it running for a good 6 months. Sure, you gotta live with slightly slower speeds than cable or DSL, but if your upgrading from painfully slow dial-up (which I was!), it’s well worth the price.