An Overview of the Football Action Available on DISH 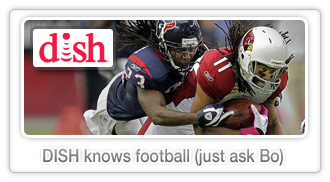 When it comes to the pigskin, DISH subscribers are just as rabid as anyone (with the NFL SUNDAY TICKET only available on DIRECTV, they often get a bad wrap). Every week or so, we get asked exactly how much football coverage there really is on DISH, so in this article we’ll discuss all the relevant channels and, collectively, how they create a surprisingly solid amount of coverage…

First off, the behemoth in the room is the NFL TICKET. DIRECTV has the exclusive rights through 2022, so if it’s a must, DISH probably isn’t right for you. If you can live without 15+ games a week, here are the top channels DISH and football fans should add to their favorites list:

NFL Network (channel #154): one of the first 24-hour channels dedicated to just one sport, no one gets more in-depth, both off and in-season. From non-stop combine coverage to primetime games on Thursday Night Football, the NFL Network is THE best source for NFL news, rumors and analysis, period. Available in America’s Top 200 plan and above.

NFL Redzone (#155): ideal for fantasy football fans (and Vegas lounges), this channel is all about scoring plays. In non-stop fashion, they take you live to EVERY scoring drive inside the 20 yard lines. Available via the Multisport add-on plan ($8/mo).

ESPN (#140): still the largest all-sports network, ESPN carries a slew of college and pro ball. On the NFL front, they have the exclusive rights to Monday Night Football through 2021 and do a pretty good job pre- and post game. When it comes to college action, ESPN probably has the broadest Saturday coverage around. Starting with College Gameday to at least 5 live games across their networks, it’s the best nationwide coverage going. Toss in ESPNU which broadcasts a ton of Top 25 match-ups and delivers round-the-clock highlights, it’s just another reason for a toga party. All channels available in America’s Top 120 and above.

CBS (#2), NBC (#4) & FOX (#11): of course, you can also catch live NFL games on the traditional broadcast channels. CBS and FOX usually carry the 10am and 1pm games (PST), while NBC has exclusive rights to Saturday Night Football. Yeah, some of the broadcast teams are annoyingly dull, but at least the HD looks great right? With regard to college ball, NBC has featured Notre Dame games since 1991 (in some form or fashion) and will continue to do so through 2025. The big 3 channels are available in every DISH package with local coverage (>99% of homes).

Regional Channels: over the past decade, football coverage has really gone local. The local Comcast and Fox Sports channels have been around for years, but more recently, college networks have spun off into their own networks. A few of the more popular include the SEC Network (#408 and not available on DIRECTV), Pac 12 Network (#409) and the Big 10 Network (#410). The upside with most of them is unparalleled coverage – that is, if you’re a USC fan, you’ll ALWAYS have the latest buzz right at your fingertips (especially helpful if you’re not in SoCal). The downside? Each network costs DISH (or any carrier) a premium so they usually have to pass along at least some of the cost. DISH does a good job of tempering the pain though…for example, in the case of the SEC and Pac 12 Networks, they’re free as long as you subscribe to the America’s Top 120+ (plus) plan and above. The Big 10 Network is included in America’s Top 200 and higher. If you’d rather not upgrade plans, the Pac 12 and Big 10 Networks are also available via the Multisport add-on plan ($8/mo).

So, at the end of the day, if you really want a ton of college and pro action, Multisport may just be the perfect play call. Either way, even though you won’t get the NFL SUNDAY TICKET, DISH’s overall coverage tends to make most pigskin fans feel like a winner. Good luck to your team this season!