Could DISH be your next wireless carrier? 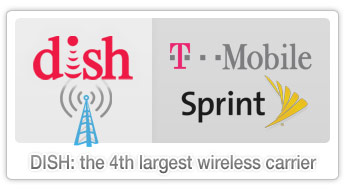 For a while now, DISH has been accumulating a wide range of wireless spectra in hopes of becoming a major wireless carrier and after a recent deal with T-Mobile and Sprint, they’ve done just that. They just purchased Sprint Boost, their prepaid wireless company, and will begin offering that service under DISH’s brand in the very near future (likely within months). That’s just the first step, however. Here’s a closer look at how and where DISH may transition into the mobile phone industry.

First off, here are the details on the deal

It all materialized last minute as part of the proposed Sprint/T-Mobile merger. Antitrust regulators balked at the merger as it would leave just 3 major mobile carriers (the merged company behind AT&T and Verizon). Then DISH swooped in. Proposing the following saved the day and immediately got DISH in the wireless phone game as the fourth largest carrier in the country…

How DISH will use and manage Boost Mobile

Boost currently has about 9.3 million subscribers from all 50 states. It’s mostly a prepaid wireless service so that means most of its customers pay before each month and that translates to better rates compared to traditional plans. Logistically, all those customers will transfer over to DISH about 3 months after the purchase closes, so probably sometime in mid 2020. DISH has publicly stated that the new Boost service will be “disruptive”, but that’s all we know regarding strategy for the moment. For now, the single biggest upside for current Boost mobile customers is that, under DISH, they’ll be transferred over to T-mobile’s wireless network, dramatically improving their reception and coverage.

So, DISH will be building out its own 5G network?

Yes. As part of this deal, they contractually agreed with the FCC to have their 5G network cover at least 20% of the U.S. population by June 2022. And if they can’t reach that goal in time, they’re subject to a voluntary penalty of up to $2.2 billion. So, big tasks ahead, and at a projected price tag of $10 billion, but it’s not much different than the massive hill they climbed when entering the satellite TV business in the ’90s.

Back to their 5G rollout, they bought into Sprint’s 800 MHZ range mainly because it can penetrate walls (unlike other spectra), making it a solid complement to their existing 600 MHZ and 700 MHZ bands. As part of the deal, they also have the option to purchase tower and network equipment that’s being phased out with the Sprint and T-Mobile merger (saving DISH a ton of time and money).

In the meantime, DISH will be leasing T-Mobile and Sprint’s wireless network

They’ll operate as an MVNO (mobile virtual network operator) which means they’ll lease the wireless network and resell it to the new Boost Mobile company. Price-wise, Boost customers shouldn’t see a big change in their plans costs, other than perhaps some promotional discounts right after the switchover but let’s see how it all shakes out. Since T-Mobile has one of the best networks in the industry, all current and future Boost customers (who were all previously just on Sprint’s network) should dig the additional range and clarity.

That’s all great, but how’s this going to effect DISH’s satellite TV service?

Current and future subscribers to DISH TV will see no change to their service. If anything, with DISH now being the country’s fourth largest wireless carrier, you may see some new bundle offers that include your cellphone service and their current 2-year price lock offers. It would also make sense for DISH to eventually integrate the Hopper’s feature set to use their own network, giving you faster and more reliable service and potentially, other smart devices that’ll run on 5G. So, this entire deal should end up being a big win-win for the company and customers alike.