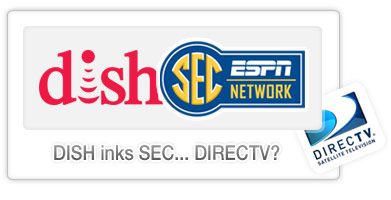 DISH and the Walt Disney Company (ESPN) recently reached an agreement to begin carrying the SEC channel starting August 14th, 2014. It’s the SEC Network’s first major win in the provider space (their only previous carrier was At&T U-Verse) and will immediately put a ton of pressure on DIRECTV, especially on the sports front. Of course, DIRECTV has long been recognized as THE leader in exclusive sports (NFL Sunday Ticket, Nascar, etc), so DISH has been looking for any opportunity to turn that tide…and for now, it’s done just that with SEC fans.

Part of a bigger deal

In addition to the SEC Network, DISH also agreed to carry ESPN3, Disney Junior, Fusion and the Longhorn Network (University of Texas sports network). Specific channel assignments haven’t been made, but expect an announcement in the coming weeks. While the details of the agreement weren’t disclosed, rumor has it the SEC Network is commanding the highest rate of any college network (PAC-12 included). As part of the deal, DISH has agreed to disable the AutoHop feature for all ABC programs on its DVR – to my knowledge, that’s the first such mass agreement and could pave the way for easier licensing negotiations in the future.

Years in the making and launching Aug 14th 2014, the SEC network has quite a solid assortment of programming planned:

Other than live games, you can also expect a variety of SEC-related news programs, documentaries, and the occasional reality show (it’s not easy filling around-the-clock programming!)

Finally, DISH subscribers (America’s 120 and above) can watch ANY game via their system of choice – TV, tablet, smartphone, desktop, etc. We’ve thoroughly tested DISH’s streaming network and, as long as you’re on 4G or better, you shouldn’t have any connection or buffering issues during live games.

When news broke of the deal, DIRECTV got quite an earful from their subscriber base, especially from sports junkies. And while internal reports seem to suggest DIRECTV doesn’t have any immediate plans to carry the SEC Network, we think it’ll happen in due time. If they do come to an agreement by channel launch, negotiations will probably delay it through July/Aug. Our best guess? DIRECTV skips the 2014 season, assesses how much market share they lose, then re-strategizes. Remember, the Pac-12 network, which launched in 2012, still isn’t available on DIRECTV (DISH carries it). That obviously doesn’t bode well for SEC fans on DIRECTV — the difference here is the SEC network carries a bit more pull nationwide. It’ll also set a very dangerous trend if they don’t partner with the top 2 NCAA conferences. College networks are only gaining traction and as they do, a higher percentage of games will ONLY be available on their networks, not broadcast or cable TV. If DIRECTV wants to continue to be known as the undisputed leader in sports, they’ll need to make a move…and soon.