The Benefits of Adding the Sling Adapter to Your DISH DVR 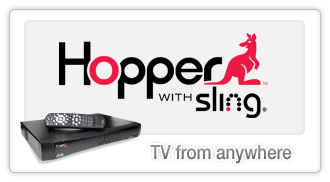 If you’re on the road or travel a lot, there’s plenty to like about the Sling technology. First off, Slingbox serves one main purpose: to give you access to your television and recordings no matter where you are (as long as you have an internet connection).

That means you can catch any part of Monday Night Football while stuck in the office past dinner time. You can even watch the latest zombie show in seat 4B over the Atlantic. Slingbox and the Sling Adapter let you take your television shows with you anywhere in the world. And the best part is the technology has gotten so advanced, you won’t have to deal with constant refreshing and buffering.

The box compresses your TV signal (or other audio/video) and makes it available through a wireless or wired connection. So, as long as you have a home network, you can hook Sling up to a satellite box, cable box, DVR, DVD player or an indoor HD antenna setup. When you’re away, all you need is the SlingPlayer app on your phone or you can watch on Slingbox.com with a supported browser on a PC or Mac.

That’s the general way but more relevant to this article, here’s how to benefit if you’re a DISH subscriber. Back in the day, you could purchase a Slingbox adapter and have a tech install it into your DVR. Nowadays, all Hopper 3s or Hopper-with-Sling DVRs (they’re slightly different DVRs) come with Slingbox pre-installed. To access Sling on either, simply install the DISH Anywhere app (iOS or Google Play) or fire up DishAnywhere.com

We’ve discussed some of the benefits of a Slingbox, but there’s so much more you can do with it:

The idea is simple, but how does the technology work? Normally, the quality of audio/video signals that are streamed over the internet is fully dependent on the accessing network. So if you have bad internet service, you’re going to have bad streaming quality. This could be a connection inside your home or several hundred miles away.

Thanks to Sling’s algorithm and their SlingStream patented technology, you’re ensured to have the best possible picture at all times. Simply hardwire your Slingbox-enabled DVR to your network (via ethernet) or just set it up via WiFi; we recommend ethernet for the best results, but wireless works 99% of the time just fine. Sling monitors the connection at your home and delivers the stream at the highest quality possible, without any buffering. On the other end, SlingStream makes on-the-spot adjustments so you can watch the best quality TV wherever (and however) you’re connected.

Of course, it’s important your ISP can handle the bandwidth of streaming high-quality audio and video. Nowadays, though, you have to work pretty hard to get bad internet — or you’re reeal rural and even then, you can get some pretty stable internet from satellite. But, for the most part, 1.5 Mbps for download speed and at least 150 Kbps to 600 Kbps upload should suffice.

Slingbox and its embedded Sling Adapter are key components to the Hopper lineage. First launched with DISH in 2013, they’ve honed the technology and the version included in the Hopper 3 is next to flawless. We’ve used it for over 4 years and I can’t recall more than a couple times when DISH Anywhere was on the fritz or even frustratingly slow. As the internet speeds up and fiber kicks in, watching and accessing your DVR from anywhere on the planet will only get easier and faster…two key factors with any remote technology.