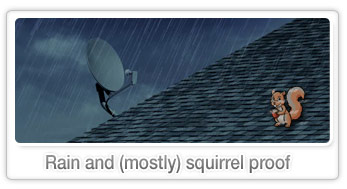 Back in the early days of satellite TV, there were plenty of potential issues floating around the web and water-cooler. From weather reception problems to questions about picture quality, some of them did have merit back in the early to mid 2000s. Fast-forward nearly 15 years and with a bunch of technological advances, most of those issues have either been squashed or massively reduced. Here, we’ll take a look at the most common myths surrounding satellite TV…updated for 2017.

Bad Weather (or a Squirrel Nest) Will Destroy my Reception

This is probably the number one concern most folks have with satellite TV. First off, the actual cause of the problem is rain (or another obstruction) getting stuck to the dish and interfering with the transmission of the signal from the rounded part of the dish to the receiver. The early dishes were definitely prone to this, mostly due to the shape and materials used during construction. They didn’t repel water all that well or provide an easy route for the water to drain.

Well, thanks to advances in surface materials that repel water better and a more intelligent shape and design, weather outages are a relatively rare things these days. We’ve had our current dish over 2 years and only experienced 1 small outage (lasting a couple minutes) when it was near hurricane conditions outside. Now, if we’re talkin’ squirrel nests, if it’s just a pint sized litter, you’re probably good, but if it’s an extended family, you’ll probably need to gently relocate ’em :).

I Need My Local Channels, No Exceptions!

In the very early years of DIRECTV and DISH (Echostar), satellite TV wasn’t legally allowed to re-transmit local programming. However, in late 1999, new legislation gave them the local green light and both companies quickly began rolling out coverage. Not surprisingly, they started out with the major markets (New York, Los Angeles, etc.), yet after a couple years, there were still significant patches of the country that didn’t have access to their local programming. Thanks to a rapidly extending network, by the mid-2000s local coverage eclipsed the 90% threshold and continued that level of growth…

Nowadays, local coverage is nearly 100%. There’s virtually no city or rural area that doesn’t have access to their local feed. The only larger issue that can sometimes arise is a heavy obstruction to a specific part of the sky (thick tree, larger building, etc.). In those cases, your installer may need to re-locate the dish to a more favorable spot…or in extreme cases, switch over to an HDTV antenna.

The Picture Quality Doesn’t Stack Up to Cable

This one’s a puzzler right from the start. Cable (with its coax wires) are inherently limited by its technology. Coaxial simply doesn’t have the bandwidth to supply all the end customers at the richest HD available. As a result, cable companies are forced to broadcast in 720p. So, even though a program may have been originally encoded in 1080p, by the time it gets to your cable box and TV, its been downgraded to 720p. All tech has its limits and this cable compression issue isn’t likely to change anytime soon. Since satellite TV is transmitted over the air, it doesn’t have the same bandwidth issues, so its always kept up with the latest HD technology (720p, 1080p, etc).

These days, almost everyone has a shiny new HDTV at home. Most are capable of displaying an uncompressed, crystal-clear 1080p signal…and, for most programs (especially sports), the gap between 720p and 1080p is Grand Canyon big. And just as you’re getting comfortable with 1080p, a new movement in display tech is currently underway: Ultra HD or 4k. In a nutshell, Ultra HD delivers 4 times the clarify of 1080p…yep, FOUR times the pixels and resolution. 4K TVs are already available at most retailers and both DIRECTV and DISH are testing programming geared for it. Unless you really want to be on the cutting edge, I recommend you wait a year or two until you buy a 4K TV. Let the cost of the tech slide back down and give the TV programming a bit of time to catch up. If/when you do, it’s definitely worth the upgrade though.

So, as you can see, satellite TV has evolved quite a bit over the years. And while it’s still not a perfect technology, it’s certainly addressed most of the issues or myths that gave it a bad wrap early on. I’ve owned just about every type of TV service over the past 3 decades and without reservation, I’d still opt for satellite TV. Hey, if it ain’t broke…