How to Watch HBO Max with DIRECTV or DISH 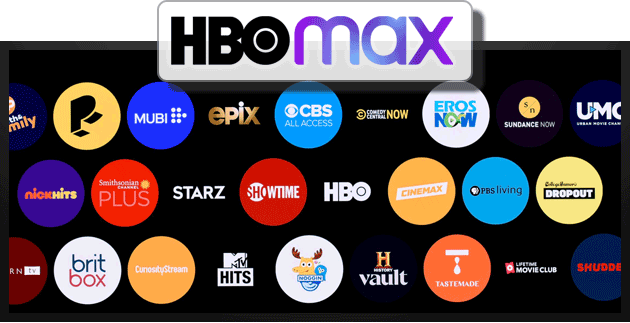 HBO Max is the latest and greatest streaming option from HBO. It gives you access to all of HBO’s programming (past and current) as well as plenty of original programming that launches on a regular basis. While it’s available as a standalone service for $14.99/mo, you can get it for free with DIRECTV or as a (somewhat) integrated app with DISH. Let’s get into all the details….

Yep. HBO Go is the online version of the traditional HBO channel. Basically, everything broadcast on HBO can either be streamed live or accessed via HBO Go. HBO Go is included free for anyone that already subscribes to the HBO channel (as part of your satellite/cable or stand-alone HBO subscription). In contrast, HBO Max is a new service that includes the entire HBO library as well as new, exclusive content from Warner Bros. and other original programming (like Netflix does with their original series). And for those not confused enough, HBO Now is the standalone streaming service that’ll eventually get phased out and replaced by HBO Max.

How to get HBO Max with DIRECTV

Since AT&T owns DIRECTV, HBO and Warnermedia, there are plenty of way to get HBO Max absolutely free (you may already have access). Here are a few of the more common ways:

How to get HBO Max with DISH

Since late 2018, AT&T has removed HBO on DISH (satellite TV, Sling TV, etc). So, if you’re a DISH subscriber and want HBO Max, you’ll need to subscribe separately and won’t qualify for a free/discounted deal. On occasion, DISH does run promos to cover part of your HBO subscription, so keep an eye out (even if you’re a current DISH subscriber). Otherwise, all options above except #1 still apply as ways to get HBO Max.

Can I try it out first?

Sure can. They offer a no-strings attached 7-day free trial, then charge $14.99/mo (cancel anytime). If you sign up for a year, that rate drops down to $11.99/mo. Down the line, they’ll likely also be launching an ad-supported version where rates are even lower for commercial-embedded content (like Youtube’s intro ads). We gave HBO Max a whirl and in addition to the high-quality programming that HBO is known for, the inclusion of WarnerMedia’s library and the original content only available on HBO Max, makes it a very attractive package, especially for movie lovers. Check it out here.

Can I still get HBO Max as part of Amazon Prime Video?

HBO Max is no longer available as an add-on channel on Amazon Prime Video.  You can now only get it via a direct subscription (HBO Max app or website).

Yep.  Straight out of Hulu's playbook, HBO Max recently released an ad-supported version of the service.  For $9.99/mo, you'll get full access while having to put up with (mostly skippable) ads during each program.

How can I get HBO Max for free?

If you have an HBO Max subscription through your cable or satellite TV provider, simply log in on the HBO Max app with those credentials.  Other than the occasional free trial, there is no current free plan with HBO Max.