Last updated on January 21st, 2016 by George Levint
On this page-
Editor’s Note: This post is out-of-date. View our latest review of MLBEI here. 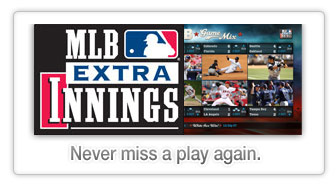 For most baseball fans, watching their favorite team’s games is a must. Most programming plans give you access to all your home games and the majority of road games. But if you want to up the ante and watch up to 80 games per week or you don’t live local to your team, you’ll need specialty programming. In the case of baseball and satellite TV, that means MLB Extra Innings. In this article, we’ll delve into the pros and cons of the popular baseball package and help you decide if it’s right for you.

If you’ve ordered MLB Extra Innings before, you know just how feature-packed it is. From live look-ins to the Strike Zone Channel, you’ll always be ahead of the curve. Here’s a quick breakdown of what you’ll get this year:

On a typical weeknight, there are 6+ games live at any given moment. At least for me, one of coolest features of this plan is the ability to listen to the home broadcast team. I get easily annoyed by most national broadcast teams (who know VERY little about the day-to-day of each squad); the hometown crew, on the other hand, uncovers under-the-radar news and dishes them all game long. From minor injuries (not widely reported) to tweaks to a swing or delivery, you can take those nuggets to the fantasy league bank all season long.

When you’re trying to watch multiple games at once, it can be a hit and miss proposition to constantly switch back and forth. Not only do you typically miss some action (and have to rewind) but it’s anything but a relaxing time. That’s how and why MLB Game Mix – on channel 720 – was born. It lets you watch up to 8 split-screen games AT ONCE. Granted, you really only want to watch it on mid to big screen TVs (otherwise, each game gets pretty small), but it rocks and then some. Most big studio shows (on ESPN, MLB Network, etc) have Game Mix on the entire time — simply put, it’s THE best way to watch 3+ games at once, period.

Similar to the NFL RedZone, the Strike Zone Channel takes you through all the current games, in real-time. It’s particularly useful if you own one or multiple fantasy teams and care more about specific star players than the outcome of a game (yeah, you know who you are :D). Broadcast on channel 719, it’s a solid perk that comes absolutely free with your subscription MLB Extra Innings.

As with most premium sports plans, the decision to sign up usually comes down to dedication/time vs price. That is, if you have enough time to watch at least a couple games a day (on average), reeeally love baseball and have a flexible budget, grab it. In 2012, the price was $216 for the entire season (or $36/mo for 6 months); expect much of the same in 2013. Note that DIRECTV doesn’t give a discount if you pay all at once. That’s because the plan is priced about as low as they can get it (after you factor in MLB’s partnership) AND there’s a ton of demand for it… it sold well at $250+ for years. Bottom line, if you consider yourself a baseball junky, fantasy stud or just want unlimited access year-round, it doesn’t get better than the MLB Extra Innings package.