Watch 4 Shows at Once with Multi-View on DISH Hopper 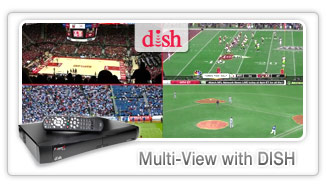 Even though we’ve talked about the DISH Hopper at some length, there are still a handful of features we haven’t really covered. This article will focus on one of its more unknown and underappreciated features, Multi-View, also known as Sports Bar Mode. It’s a smarter version of the traditional Picture-in-Picture, letting you stack up to 4 different channels, all in one configurable view. Read on for all the details on how to find, set and watch this feature exclusive to the Hopper 3…

Setting up Multi-View on the Hopper

By default, the Hopper comes equipped with a variety of intuitively cool features. From Netflix integration to commercial skipping via AutoHop, it’s probably the most advanced DVR on the market. Multi-View, then, is the tantalizing cherry on top. It’s easy to miss though, so for starters, here’s how to fire it up via your remote:

Note that MultiView only works with the Hopper 3 (and associated Joeys or Wallys), not the scaled down Hopper Duo or any other non-Hopper DVR. It’s specific to Hopper 3’s chip base so don’t expect it to transfer to other receivers anytime soon. Here’s a bit more on how to turn it on…

Only works with Hopper-compatible remotes

Since just a handful of remotes let you watch/enable MultiView, let’s cover the process for the more common Hopper remotes, model 40 and the new voice remote, model 50.  On the model 40, you’ll want to press the red button — that’ll spawn the “Options” menu with the “Picture-in-Picture tab.

On the more advanced model 50 remote, simply hit the “Options” button. The 52/54 remotes (not pictured, but have an “Options” button) round out the remotes compatible with MultiView.

Now that you’re on the “Options” menu, you’ll select from features such as Closed Captioning, Parental Controls and Picture-in-Picture.   Choose PiP to bring up the different modes.  Along with Multiview, you’ll see:

Configure MultiView and get multitasking

By default, Multiview will stack and stream the last 4 channels you watched (that can also include DVR recordings and Video on Demand content). The “hot” channel with audio will be indicated by a red border around it.  Easy, right? Simply scroll to whichever of the 4 feeds you want to hear and hit the “Select” button.

With regard to video quality, MultiView is fully compatible with 4k and HD televisions. If four streams are playing at once on a 4K TV, they’ll each run at 1080p (pixel-wise, it’s nearly impossible to split up the viewing area into four distinct 4K quadrants so it downgrades each to the best quality available). On HDTVs, each of the four channels will render in 540p.

Of all the potential uses for MultiView, live sports is probably right up there at top. Originally launched by DISH to coincide with the March Madness tourney, Sports Bar Mode is a fantasy sports or mega fan’s wonderland. Just another reason to stay at home, I guess, though we always advocate playing just as hard outside as in. So, in this case, suppose that means a quadrathlon is on deck :P.

So is it worth getting DISH just for MultiView? Probably not for the average person but considering DIRECTV’s PiP maxes out at 2 streams, not 4, if someone in your household is a multitaskin’  pro, it may be a good reason to lean towards DISH.